Victoria Day was a beautiful day for a hike.  We easily found the somewhat faded but clearly visible trail sign at the start of the Prices Corner section of the GVT and headed off beside newly planted fields.  Unfortunately I had left the GVT map and instructions at home and when we lost sight of the blazes, we lost the trail and had to bushwhack cross-country to our bikes.  We used our cell phone GPS to find the next section of the Elora Cataract Trailway and biked back along the trail to the car. 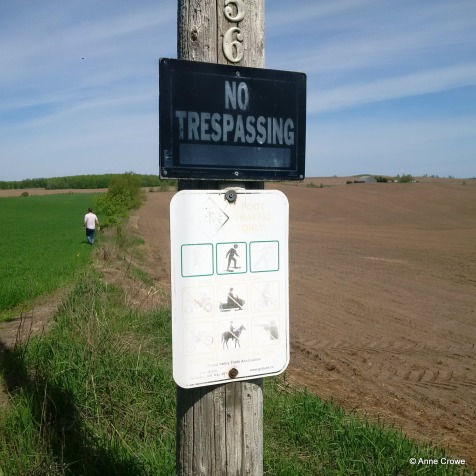 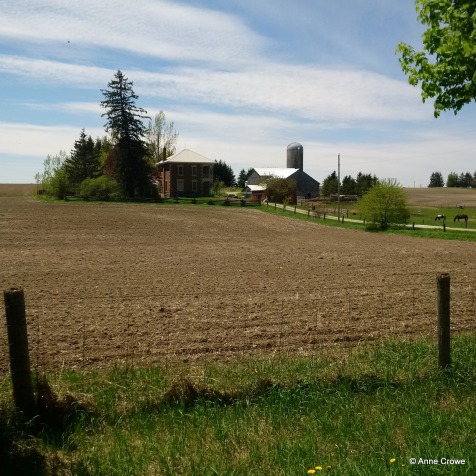 There were a few unusual sights.  Just poking their heads from the leaf litter were the fruiting bodies of horsetails.  And on the Elora Cataract Trail, there were “tractor crossing” signs.  A good day’s outing but we couldn’t claim to have completed the Prices Corner section of the GVT. 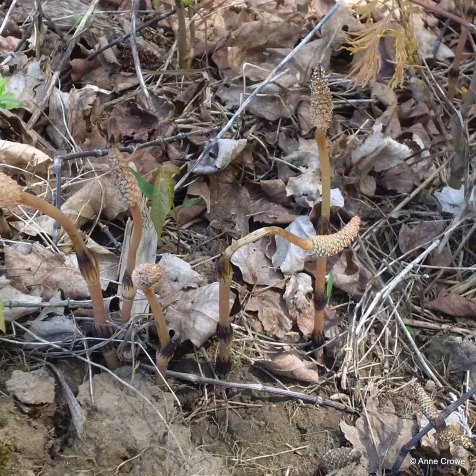 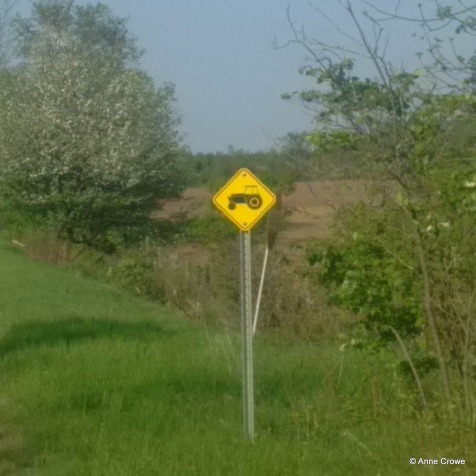 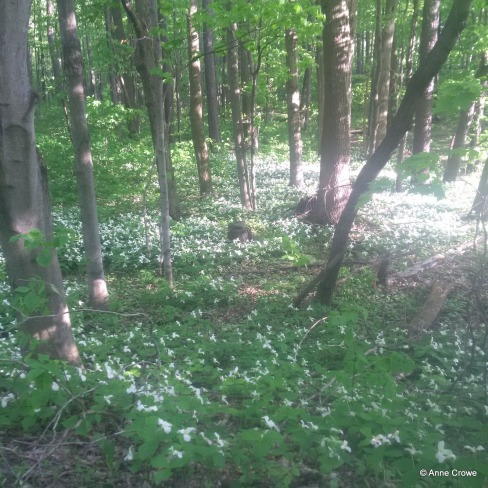 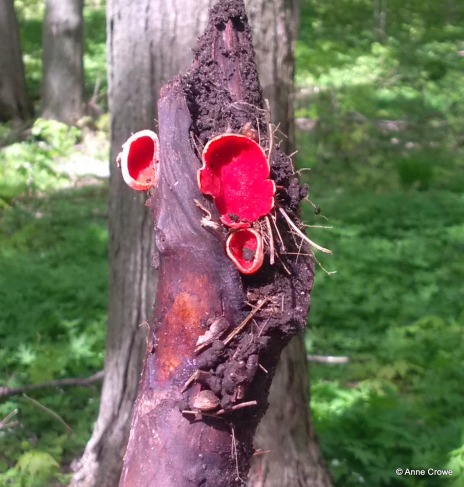 On Friday afternoon, we had time for a short hike and headed back to Prices Corners to find a short section of trail between 10th and 11th Line in Dufferin County.  We discovered the reason that most people hike the trail going upstream–the signs and the blazes are much more visible and the Grand Valley Trail guidebook has detailed instructions from Lake Erie north.   We were unable find the northern end of the short trail section between 10th and 11th Line in Dufferin County, so we started at the southern end.  When we finished the hike we found the trail sign, which is just visible behind the bushes in the left hand photo below.  We rode our bikes to Belwood and took the Elora Cataract Trailway back to the car. 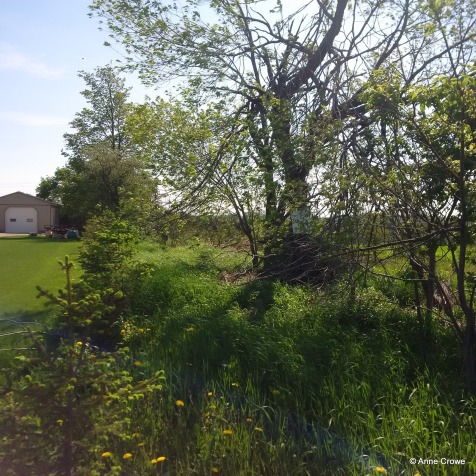 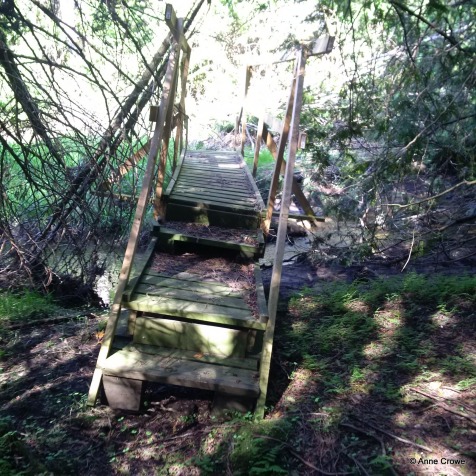 Sunday was a blazing hot day but we were determined to complete the rest of the Prices Corner section.  We began at Prices Corner itself, leaving our bikes beside the little church and cemetery, heading upstream on foot.  Today we had the map and were able to follow the guidebook instructions, which were very helpful whenever the blazes petered out.  In the last couple of weeks, the mosquitos have emerged in full force, especially in wooded areas.   At that point we realized that we had left the mosquito repellent in the car!  We hardly dared to stop to take pictures of the violets. 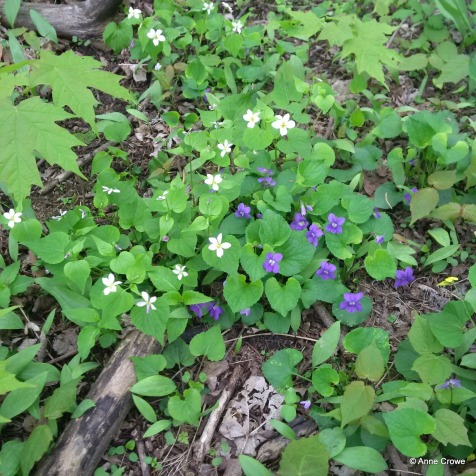 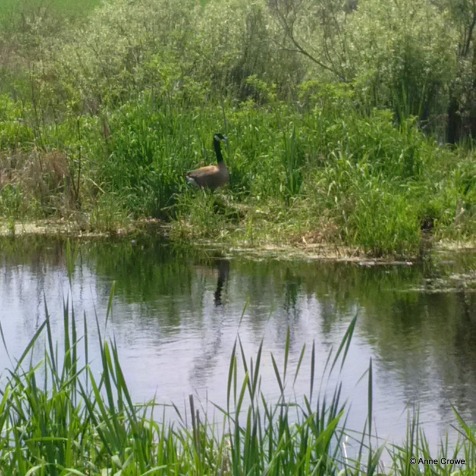 Near a pond, we scared a wild turkey, who startled us by flapping wildly as he rose out of the bushes.  He was too quick to photograph so I made do with a Canada Goose, nesting beside the little pond.  A white tailed deer bounded away across the fields, flapping her white tail at us.  Several brand new foals were out in the fields keeping close to their mothers.

The trail gave us a good workup going up and down the moraines several times, crossing several woodlots, before heading alongside the fields, where the crops are just starting to poke their heads above the soil.  Once we reached Sideroad 27, we cycled back to Prices Corners and then headed to Belwood where we caught our first glimpse of the main attraction:  the Grand River above Belwood Lake. 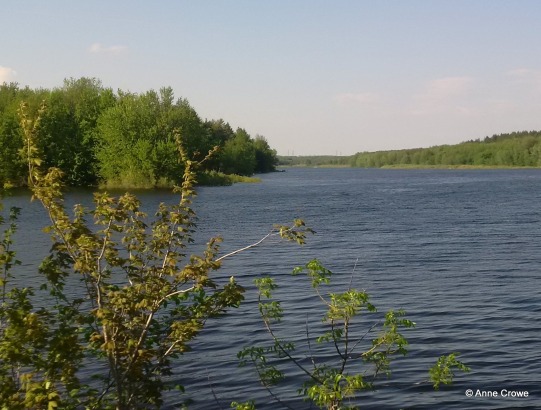 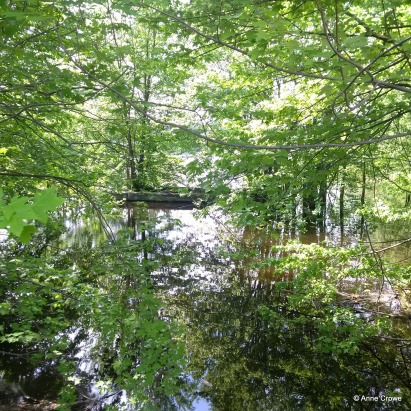