Despite the blast furnace heat (35ºC or over 40ºC with the humidex) the Elora Fergus section was definitely the best day’s hike so far.  The hike takes in the exquisite Victorian villages of Elora and Fergus, and criss-crosses the Grand River multiple times in between.  Most of the time, the trail follows wooded hiking trails or a rail trail, close to the Grand, offering glimpses of the river here and there through the trees.

We got up early intending to start hiking before the heat built up.  However, our son wanted to take his girlfriend canoeing on the Grand River (how could we object to an expedition on the Grand?) which delayed our start.  We dropped them off with the canoe, paddles and life jackets, near Conestogo on our way to drop our bikes off in Fergus.

We parked at the Elora Community Centre and headed over the David Street bridge, which offers views up and down the Irvine Creek, a large tributary of the Grand.  Then the trail meanders along the edge of the Elora Gorge, through a wooded park and along quiet streets into the town.  We stopped to admire the Church Street Clock and then headed over a pedestrian bridge to the other side of the Grand.

The trail heads along the Elora Guelph Rail Trail and then again crosses the Grand River, offering views of the river (including a great blue heron) and the Wellington County Museum high on the hill.   From the rail trail, it descends into a wooded park and follows a community trail to the outskirts of Fergus.  After a short walk along a tidy suburban street, we were amazed to find the Grand River Arburetum–a beautiful shady park with neatly labeled trees.  The trail takes you back to the river, through a little riverside rock garden to another pedestrian bridge in the centre of Fergus.

A busker (appropriately playing the bagpipes) serenaded us near the Fergus Market.  After that we were glad to cool down for a while in the air conditioning at the Fergus Tim Hortons. Having revived ourselves, it was back to the Fergus Market.   Shortly thereafter, the trail goes into Confederation Park, through the woods and back over the river.  We headed up to the Elora Cataract Trailway and picked up our bikes for the ride back to Elora.  The rail trail is missing a section between Gzowski Street and Beatty Line, but detours along quiet city streets.  The ECT officially ends at Gerrie Road, but the off-road trail continues as the Trans Canada Trail into Elora, where we continued through the town back to our starting point. 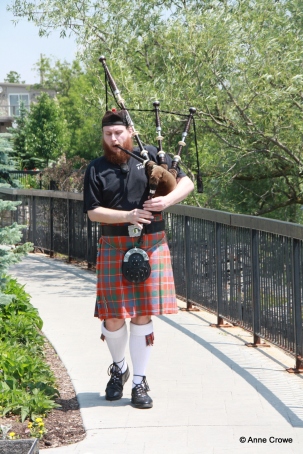 We have now completed more than 50 km of the Grand Valley Trail, as well as biking the entire  Elora Cataract Trailway from Forks of the Credit to Elora!  From here as we complete our Grand Valley Trail expedition, we will also be following the rest of the Trans Canada Trail through the Grand River Watershed.