64 km along the THB, Escarpment and Chippewa Rail Trails, over 2 days.

From Brantford, the Trans Canada Trail turns away from the Grand River, taking mainly rail trails through Hamilton, returning to the Grand River at Caledonia.  Both sections cross the Niagara Escarpment.  While it is possible to ride from Brantford to Caledonia via Hamilton in a day, this would be a long day and would necessitate cycling up the escarpment.  The alternative was to cycle from Caledonia to Hamilton one day and from Brantford to Hamilton another, enabling us to have the fun of cycling down the escarpment twice … an easy decision.

The Chippewa Rail Trail follows an old rail line from Caledonia to the outskirts of Hamilton.  The first section is currently closed for renovation, so we started where the trail crosses Highway 66, just outside Caledonia.  The trail is in good condition with excellent signage, including markers at each kilometer point and signs identifying each road crossing.

After passing through a quiet rural area, the trail ends on the outskirts of Hamilton, just before Highway 403.  After a short section on a busy road, there is a multi-use trail leading to a pedestrian bridge over Highway 403 (I have lost track of how many pedestrian overpasses we have crossed over this highway!)

From here it joins the Escarpment Rail Trail and the fun begins.  The railway blasted the track into the side of the escarpment, so there is a steep bank on one side and a very steep drop on the other.  The railroad company wanted to minimize fuel costs going uphill and risks going downhill, so the track descends gently and steadily. The trail is wide and the precipice is covered in trees, so it feels very safe to glide down at full tilt.  Every once in a while, the trees open up to a view over the city of Hamilton.  After a long summer of hiking and biking up and down steep hills, this felt like a fair reward. 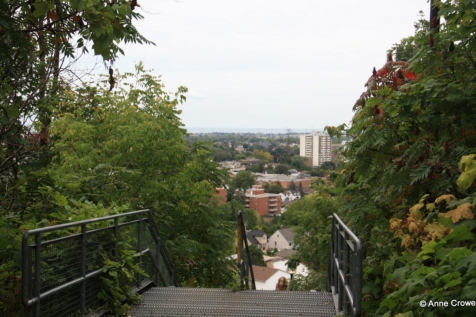 The Escarpment Trail ends in the middle of the city of Hamilton, which is blessed with great bike infrastructure.  Most streets had bike lanes, some of which were protected by a parking lane.  The only exception came when we had to bike a couple of blocks of Aberdeen Ave which is a very busy 4 lane road with no bike lane.  Fortunately we soon turned off onto a quiet street and met up with the end of the Hamilton Brantford Rail Trail finishing up close to McMaster University at the conveniently located Fairweather Brewing Company. 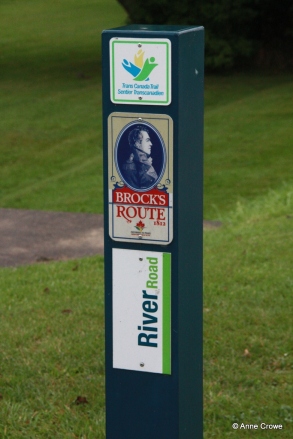 The following week, we set off on the second section of this route, from Brantford back to Hamilton.  This time we were on the Hamilton Brantford Rail Trail (formerly the Toronto Hamilton Buffalo Railway) all the way back to the Brewing Company.  This route was more interesting, passing the Mohawk Chapel, the oldest existing church in Ontario.  We then passed an old canal and some rotting lock machinery and rode through a railway tunnel.

The trail passes the Dundas Valley Conservation Authority Trail Centre, situated in a renovated old train station, with an historic train parked on the tracks in front of it. 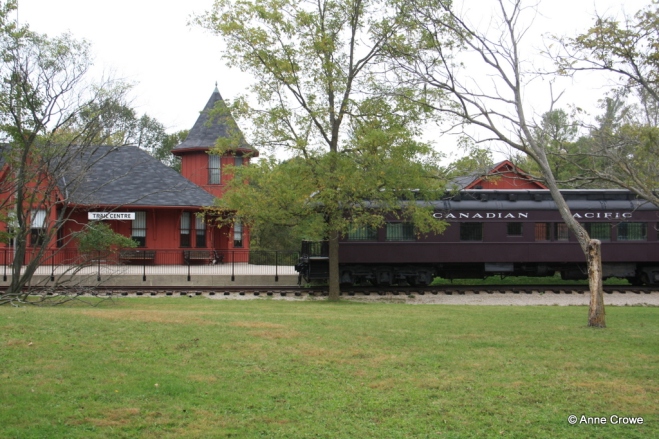 After gliding down the escarpment one more time, we stopped at the Fairweather Brewing Company to pick up a few bottles of their craft beer to take home.  Shortly thereafter, my partner blew a tire.  So he headed back to the brewery to drown his sorrows while I rode on through Hamilton back to our vehicle at the Hamilton Botanical Gardens.  The Trans Canada Trail joins the Waterfront Trail and heads past Cootes Paradise where a couple of people and a number of cormorants were patiently fishing.  Then the trail joins York Boulevard.  Which was a shock because the street is far above the trail.  It was necessary to climb six double flights of stairs, hauling my bicycle (and the beer!) along a narrow gutter at the edge of the stairs.

There was one final historic moment–a plaque memorializing the War of 1812.

York Road and Plains Road are busy roads with inconsistent bike lanes.  Fortunately on a Sunday, the traffic was fairly light and I made it back to Botanical Gardens.  There was no time to enjoy the greenhouses, as I had to rescue my partner from the Brewery!

It has been an amazing summer.  We have explored our own backyard and discovered the delights of our own area.  We have seen nature in abundance, experienced culture and history and enjoyed excellent meals–all within a 2 hour drive of home.  Now it is time to plan for next year.  Stay tuned for our next adventure–after spending a summer weaving a track across and beside the Grand River, I think it is time to get out our canoe and see what there is to see from between its banks.